Nico (Japanese: ニコ Nico) is a child who lives in Nevassa, the capital city of Daein. 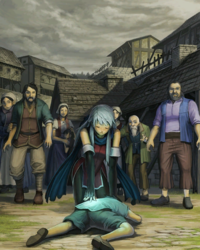 Nico grew up in the aftermath of the Mad King's War, while Daein was ruled by Numida's Begnion Imperial Occupation Army. He became a great admirer of the Dawn Brigade when they fought back against the oppressive occupiers, and often talked about them with his friends.[1] In the early summer of 648, he and his mother met the Dawn Brigade for the first time when Pugo and his bandits attacked the town. Three Dawn Brigade members, Micaiah, Edward, and Leonardo, came to their aid and defeated Pugo's crew, and Nico was excited to meet his heroes. Shortly after, when the Dawn Brigade tried to evade capture, Nico was part of the crowd who stood between the Brigade and the Begnion army and was shot by a Begnion archer. Having sensed this danger, Micaiah came back and healed Nico with her rare Sacrifice ability, expending all of her energy to save him. Even after being shot, Nico continued to stand between Begnion and the Dawn Brigade, as they escaped with Micaiah, until Jarod arrived.

Some time later, long after the Dawn Brigade had formed the Daein Liberation army and successfully taken back Daein, Micaiah and her army were drawn into the war between Begnion and the Laguz Alliance despite their intense misgivings about the war. Nico and his mother had the opportunity to meet Micaiah and Sothe again during the war, and Nico's expression of great admiration for Micaiah greatly touched her, reaffirming her resolve to fight to protect Daein from the wrath of the Begnion senate in the name of ensuring that good people like Nico would survive.[2]

Nico appears in cutscenes in the first two chapters of Part 1. In localized versions of the game, he later re-appears in a base conversation in Part 3 Chapter 12.

Nico is a great admirer of the Dawn Brigade, and dreams of growing up to be as great a hero as its members.[3] Like many citizens of Daein, he regards Micaiah and the rest of the Dawn Brigade as symbols of hope and fortune, and believes that as long as Daein has the Dawn Brigade, they will safely make it through any war or crisis, and this encourages him to never give up even in the darkest of times.[2]