Murder Hollace (Japanese: マーダーホレス) is the sidequest of the eleventh chapter of Fire Emblem: Thracia 776. In order to play this chapter, the must have completed the previous chapter in 30 turns or fewer, triggered the trap by allowing Leif to enter the central courtyard, and kept Fred alive.

August, feeling that time is of the essence, instructs Leif to have their forces enter the fortress's dungeons to clear out any remaining troops and rescue any child prisoners before they are executed.

Kempf is then seen ordering a begrudging Oltoph to stay behind and fight to the death to guarantee escape. Kempf also orders Oltoph to execute any remaining prisoners as an afterthought and makes his way to the exit.

Olwen, who is locked in one of the cells with some children, witnesses their terror and fully grasps what the child hunts really are. The children are initially angry at her due to being a soldier of the Empire but she reassures them that she will help them escape. She is freed by Leif's forces and her subordinate Fred during the fighting.

After Friege's forces are cleared out of the dungeon and the children escape, Olwen overhears August and Dryas discussing the honor of house Friege in light of the fact that Ishtar's romantic relationship with Julius and open participation in the child hunts makes the entire house followers of Loptous. Olwen is confused by this information and voices her objections to this; she then agrees to accompany Leif's forces to learn the truth of what the Empire, and her brother Reinhardt, have really been doing.

Units are arranged based on their position in deployment order after Leif. 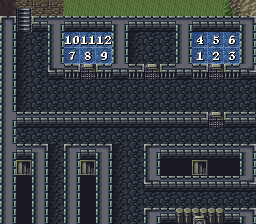 Placement of returning units captured in the previous chapter.

Additionally, up to twelve units that were captured in the previous chapter will return here as prisoners in the upper cells. They are positioned based on their place in deployment order in the previous chapter. If more than twelve units were captured, the unit last in deployment order will not be present; however, they will still be re-recruited at the end of the chapter. The second, fourth, fifth, and sixth prisoners will overlap with Olwen and the Civilians; they cannot be interacted with until the NPC no longer shares the tile, either through movement on their turn, being rescued, or being killed.

Version 1.06 of the Lil' Manster fan translation adjusted the positions of the first six captives, placing them in the middle cell rather than sharing Olwen's (shifting each of them four tiles west).[1]

All reinforcements are halted upon Oltoph's defeat.

Stats with two figures separated by a ~ are presented as a range, representing stats that vary due to random growths. The figures to the left and right of the ~ are the stat's minimum and maximum possible values respectively.
Main article: Oltoph

The main difficulty of this chapter comes not from fighting, but more rather avoiding fighting. Most of the enemies here have 2 range weapons that will chip at your units with lower bulk or avoid. Bring a door key or lockpick for Oltoph's room, and feel free to capture him, since his lack of a weapon that can counter at 1 or 2 range means he is an automatic capture for anyone with more constitution than him. Siege tomes sell for a good profit. Another option is to simply warp to the boss and capture him so that he doesn't cause any trouble with his siege tomes, though this requires the warped unit to survive all of the enemies in the throne room.

Fred appears as a player unit on turn 2, and the main goal with him is to make a beeline for Olwen's cell. It is best that he attacks the Soldiers at 2 range, as he will do magic damage. Due to the fact that Olwen is standing right next to the cell door and won't move, the Soldiers (who are armed with Javelins) will continually attack and may kill her if Fred does not hurry. However, if you want to recruit Ilios later in Chapter 16A, you must not recruit her in this chapter, or let her die if you did recruit her.

Also note that the cells in the northern part of the map have the purpose of containing the player's captured units if they were captured in the previous chapter. However, this is very unlikely to have happened due to the previous map having few enemies and only one place for them to escape with a captured player unit.