The Mine (Japanese: フレイボム Freyr Bomb) is an item introduced in and, in legitimate gameplay, exclusive to Fire Emblem: The Blazing Blade. Its role is to act as a trap for enemies, being set on spaces on the map; once set, if any unit passes over the trapped space, the Mine will explode and deal damage to them. 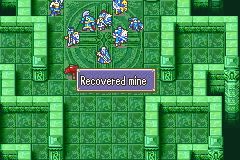 Jerme, an enemy Assassin, recovers a Mine set by the player's army.

A set Mine item behaves identically to the mine trap hazard from The Binding Blade. If a non-Thief infantry or cavalry unit of any affiliation passes over a set Mine while attempting to reach some other tile, the Mine will trigger and halt their movement. Flying units will only trigger Mines if they specifically wait on the trapped tile, and will not set it off if they just pass over it.

Mines can be disabled by Thieves of any affiliation if they wait on top of the trapped tile. If an Assassin* waits on top of a trapped tile, not only do they disable the Mine, but they also retrieve it and add it to their inventory for later reuse, as long as they have free space in their inventory.

In Fire Emblem: The Blazing Blade, the Mine is the subject of a famously exploitable glitch which allows the player to use Mines to temporarily take control of the enemy army. During the enemy phase, if a unit on the enemy side triggers a set Mine, the player can soft-reset or turn off the system while the exploding animation is playing. Upon returning to the game, the enemy's movement plays again and they are still affected by the Mine, but once this ends the player is left in control of the enemy phase for the rest of the turn (or soft-resetting/powering-down).

When the glitch is in effect, the player has total control of the enemy army and can perform any action that they could with their own army. This allows them to make enemies perform actions that enemies otherwise would never perform, such as rescuing and trading with each other, or accessing Merlinus's convoy. If there is an enemy present who drops an item upon defeat, the player can use the glitch to make this enemy trade with others to replace the item they drop with a different enemy's item. One of the most common applications of this is in Chapter 24E/26H, where players often use the glitch to make the boss Vaida either put her unique Spear into the convoy, or trade it to an enemy Shaman who drops a Luna tome to make them drop that Spear instead.