Mila's Turnwheel (Japanese: ミラの歯車 Mila's Gear) is the name of two artifacts associated with the goddess Mila appearing in Fire Emblem Echoes: Shadows of Valentia. It has several gameplay functions, being related to amiibo support and the limited ability to rewind turns in battle to undo unit actions. 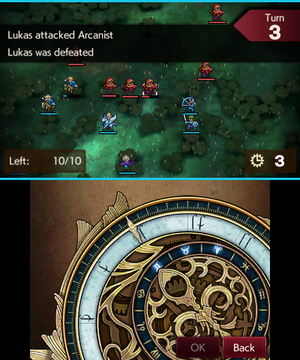 Using Mila's Turnwheel; the turnwheel itself appears on the bottom screen, while undone actions are on the top screen.

Two Turnwheels are known to exist. Before the events of the game both were stored at the temple on Novis.

Eventually, Silque sets out from Novis[1] to deliver one of them to Mycen, but is waylaid and whisked away to the Thieves' Shrine by a pack of bandits. She gives it to Alm, the eventual intended recipient, after being rescued by him and learning that he has already set out on his journey with the Deliverance. If Alm never rescued Silque he will instead receive it from a deliveryman at Zofia Castle.[2] The second remained at the priory on Novis after Silque's departure; Celica brings it with her at the start of her journey.

After Alm and Celica are reunited during Act 5, two Turnwheels are used to unlock the final door at Duma's Altar.

The Turnwheel may only record a limited number of actions in each battle; after this limit is exceeded, the Turnwheel can no longer be used during that battle. The player will be notified shortly before this happens, by a message stating that "the Turnwheel made a sound".

Items called Memory Prisms can be found throughout the game. Using Mila's Turnwheel, these fragments can be seen; they show past experiences of characters and expand on their lives before joining Alm and Celica. These fragments can also be from the distant past, with one prism, for example, being Mila and Duma's memories of the forging of their accord.

There are a total of ten memories to find throughout the game, featuring the memories of playable characters, NPCs, and even some antagonists. 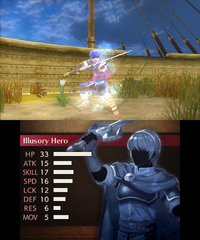 An illusory figure resembling Marth summoned from an amiibo with Mila's Turnwheel.

Mila's Turnwheel can be used to view any support conversation the player has previously unlocked.

While on the world map, Mila's Turnwheel can be used to access the Mila's Ordeals and Duma's Ordeals dungeons, if the player owns the Celica and Alm amiibo respectively. It may also write Alm and Celica's current stats to their respective amiibo, and during battle, these amiibo may be used to summon ghostly versions of their respective characters to battle for a single turn.

Mila's Turnwheel can be used to summon temporary allies from amiibo figurines to aid in combat for one turn, at the cost of some of Alm or Celica's HP. These ghostly warriors are fleeting, only appearing for a single turn. The Marth, Robin, Lucina, Roy, Ike, and both the standard and "Player 2" versions of the Corrin amiibo all summon illusory heroes in that character's likeness. Other amiibo are compatible with this feature as well, however amiibo without custom summoned phantoms summon an allied monster instead.[4]