Thracia (pronounced /ˈθɹeɪʃə/[key][1]; Japanese: トラキア Thracia) is a nation occupying the southern half of the Thracian Peninsula of Jugdral, situated to the south of the Munster District and connected to Miletos by a thin strip of land to the north-west. It was originally jointly founded by siblings Dáinn and Njörun of the Twelve Crusaders following the downfall of the Loptrian Empire, but a schism early in its history caused it to split into the two rival territories; its royal family is of Dáinn's lineage, and thus are the inheritors of his holy weapon, the Heavenly Lance Gungnir. The vast majority of Thracia's land is dominated by mountains and thus very little is arable and suited for farming, and so the nation has historically survived through hiring out its famed Wyvern Riders as mercenaries. 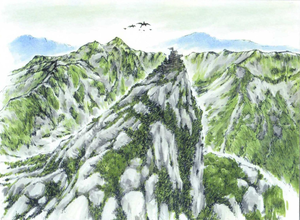 Originally a single nation encompassing the entire Thracian Peninsula, Thracia was jointly founded by the Crusaders Dáinn and Njörun, with Dáinn as its king after the downfall of the Loptrian Empire in Grann 648, and for a time the nation experienced peace. However, the nation was stricken by turmoil in Grann 658, ten years after foundation, after a series of tragedies starting with the Tragedy of the Gáe Bolg, in which Njörun inadvertently killed her own husband while trying to prevent him and Dáinn from fighting, followed by Njörun's suicide and Dáinn's own mysterious demise[2]. This tragedy left rule of Thracia in the hands of Dáinn's son, a cruel and ill-tempered man who terrorized and suppressed the nation's people. In response, Njörun's son led a coalition of Thracian dukes in revolt against Dáinn's son, claiming the northern half of the peninsula as their own individual nations; with Grannvale's mediatory intervention and the eventual assent of Dáinn's son, the territory formally seceded from Thracia and became the independent Munster District, a collective of kingdoms led by the kingdom founded by Njörun's son, Leonster[3].

For much of its subsequent history, Thracia vied to reclaim the northern half of the peninsula as its own, as it was severely crippled by its lack of access to the lush vegetation of the north; the Thracian territory possesses very little arable land of its own. Its primary means of survival was to hire its famous Dragon Knights out as mercenaries, funding its own survival by this meager pay. However, with Leonster's elite Lanceritter knight legion, Thracia was never able to make any significant progress in fighting the Munster District, and so the two nations remained in a stalemate for over a century. Thracia's fortunes at first appeared to turn in Grann 761, when the reigning King Travant brutally killed Leonster's Prince Quan and the Lanceritter in an ambush which came to be known as the Aed Massacre, and subsequently assisted in the downfall of the Munster District in cooperation with Raydrik of Conote; however, this was short-lived as Raydrik in turn betrayed Travant to the newly-minted Grannvale Empire, which subdued the Thracian army, claimed the Munster District as its own under Bloom of Friege, and cowed Travant into an unwilling and unequal alliance with Grannvale.

Thracia remained a servant state to Grannvale until Grann 777, in which Seliph Baldos Chalphy led his revolution army against Grannvale through the Munster District, liberating it and uniting with his cousin Leif, orphaned prince of Leonster. With the Grannvale occupation defeated, Travant sought to take the opportunity to strike at Seliph's tired army and reclaim the Munster District for himself, but instead entered a protracted battle with Seliph as he sought to invade and subdue Thracia; during this time, Leif was reunited with Altena, his elder sister who had been taken by Travant following his murder of her parents and raised as his own daughter. The conflict ended with Thracia in Seliph's control and Travant dead; however, his son Arion survived the battle, taken away by Grannvale's Prince Julius to ensure his survival. Under Arion, Thracia initially remained opposed to Seliph after he withdrew from the nation to march on Miletos and Grannvale; however, Altena convinced Arion to stand down and ally with Seliph instead. Following Seliph's victory against Julius at Belhalla, Thracia and the Munster District were reunited into a single nation by Leif, Altena and Arion, forming the New Kingdom of Thracia with Leif as its king.

Meath Castle is the northernmost castle of Thracia, located near its border with the Munster District. It served as the first line of defense against Seliph's pending invasion, under General Maykov, and subsequently served as Seliph's base in his foray into the rest of Thracia.

Luthecia Castle is the eastermost castle of Thracia, near its border with Miletos and the Munster District. It was placed under the guard of Distler, a general and advisor to Travant, during Seliph's invasion.

Iz is a coastal Thracian village, and the northern neighbor of Fiana. It was the site of Leif's first skirmish on his way to Munster to rescue Nanna and Mareeta, and was where he met the tactician August.

Mt. Violdrake (Japanese: 紫竜山 Purple Dragon Mountain) is a mountain located in the western reaches of Thracia, between Tahra and Hannibal's mansion. It is the home of a band of bandits led by Dagdar, an ally of Eyvel of Fiana. The village nearby is under the protection of Dagdar's bandits.