The Gorgon (Japanese: ゴーゴン Gorgon) class is a monster class originating in and exclusive to Fire Emblem: The Sacred Stones, they appear quite late into the game. Their appearance somewhat resembles the Nāga, a half-human, half-snake being often featured in Buddhism and Hinduism.

They are able to turn enemies to stone with the monster weapon Stone, causing the Stone condition. They use dark magic weapons that are exclusive to monsters, such as Stone or Shadowshot. Like all other monster classes, they are enemy-only.

Gorgons are very challenging foes in battle. Gorgons always have stone, and due to that weapon's range they can attempt to inflict units without fear of counterattack, even if their low accuracy usually results in misses. Due to being lategame enemies, they have quite high stats, and are on the same level as other "promoted" monsters, such as wights or gwyllgis.

A gorgon appears as the boss of Chapter 18.

A generic Gorgon is featured on one card in Fire Emblem Cipher. 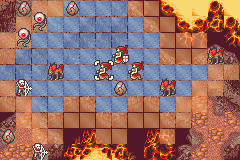 A gorgon's movement range in the Japanese release, it can travel over the cliff tiles.