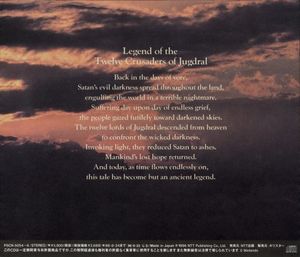 The back cover and its translation of the Genealogy opening.

Back in the days of yore,
Satan's evil darkness spread throughout the land,
engulfing the world in a terrible nightmare.
Suffering day upon day of endless grief,
the people gazed futilely toward darkened skies.
The twelve lords of Jugdral descended from heaven
to confront the wicked darkness.
Invoking light, they reduced Satan to ashes.
Mankind's lost hope returned.
And today, as time flows endlessly on,
this tale has become but an ancient legend.