Eve (Japanese: イーヴ Eve) is the father of Jeanne and Tristan, and a member of Nordion's elite Cross Knights alongside his brothers Eva and Alva. During the Agustrian civil war, he, along with his brothers, was tasked with the job of protecting Princess Lachesis of Nordion.

Eve is a Cross Knight of Nordion who was tasked with the job of guarding Princess Lachesis from Elliot along with his brothers Eva and Alva. Depending on the player's actions in chapter 2, Eve and his brothers may be killed in the fighting, or may successfully protect Lachesis and themselves survive; if they do survive, Eve and his brothers gift a Knight Ring to Lachesis before returning to guard Nordion. If Eve is not killed in Sigurd's initial invasion of Agustria, he is at some point killed in action; regardless, his death orphans his children Jeanne and Tristan.[1]

Eve has little dialogue; he is clearly a loyal knight of Nordion, as he is willing to risk his life to protect Princess Lachesis.

Eve was featured on one TCG card. 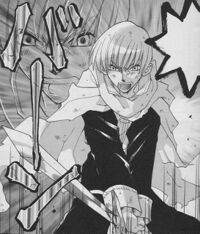 Eve, Eva, and Alva's roles are greatly expanded upon in Fujimori Nuttsu's Genealogy of the Holy War manga, which adapts the events of the first generation of the game in a more comedic manner. Eve is introduced as the eldest brother of the Famous Triplet Paladins of Nordion, who all look near-identical and are easily mistaken for another even after changing their hairstyles to be distinct. He is depicted as being a hot-blooded and passionate knight and Lachesis's retainer; he is also shown to have an unrequited love interest towards Lachesis.

Unlike in chapter 2 of Fire Emblem: Genealogy of the Holy War, Eve, Eva, and Alva were initially tasked with accompanying Lachesis's attack on Sigurd's army, which she mistook for Elliot's. After this misunderstanding was resolved, Eve assisted Sigurd's army in fighting Elliot's and Macbeth's armies. It is also during this time that Eve developed a one-sided rivalry towards Chulainn, whom Lachesis developed an infatuation towards.

During the assault on Mackily Castle, Clement managed to put Lachesis to sleep with his Sleep staff. In a rage, Eve ordered Eva and Alva to storm the castle with him, single-handedly destroying any opposition. Inside the castle, the trio confronted Clement; Clement attacked and severely wounded Eve, but Eve managed to kill Clement.

Following the capture of Agusti Castle and Eldigan's rescue, Alva revealed to his siblings that he was given a Knight Ring by Eldigan (who had mistaken him for Eva) to give to Lachesis back when Eldigan went off to plead with Chagall. Eve, seeing an opportunity to be alone with Lachesis, took the ring and delivered it to her. Lachesis revealed to Eve that she would be following Sigurd's army and the triplets would remain in Nordion to defend it, with her stating that she assigned this job to Eve because she trusts him. As a final sign of gratitude, she kissed Eve and acknowledged his feelings towards her, saying she knew about them all along.