Desaix (pronounced /dəˈseɪ/[key][1]; Japanese: ドゼー Dozer) is a baron and boss in Fire Emblem Gaiden. He is a major antagonist throughout the first half of Gaiden's plot.

He is responsible for the death of the Zofian royal family, sans Celica. He also framed Mycen for the murder of the royal family.

Desaix appears as a boss twice in Gaiden. In his first appearance, in chapter 1, he isn't really intended to be defeated, though it is possible to beat him if the player levels up their units on monster encounters. In the second encounter, in chapter 3, he is a normal fight.

Somewhat curiously, he is implied to know Alm's identity as Rudolf's son,[2] though how he would come upon this knowledge is unknown.

Desaix reprises his role in the remake. He is also featured in a Memory Prism, secretly discussing his plan to kill the members of the Zofian royal family with Slayde.

Desaix seems to be willing to do anything for power, as he killed the entire Zofian royal family aside from Celica, and allies with Rigel despite that breaking a millennium-old pact made by the gods. 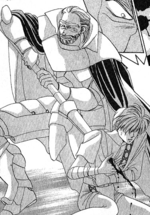 As the Gaiden manga skips the majority of chapters one and two, Desaix's first appearance in-person in the manga is at his fortress. Desaix plans to execute Mathilda, a Zofian knight with connections to the Deliverance, as an example.

Alm rushes to her aid and to defeat Desaix. During the battle Desaix lands a fatal blow on Kliff, enraging Alm. Initally, Desaix laughs off Alm's attacks, claiming that his armor has been made impenetrable by Duma. Alm, despite shattering his sword on Desaix's armor, is not daunted, and uses his broken sword to gouge out Desaix's eye.

Defeated, Desaix quickly changes his story, saying his armor had been cursed by Duma, and caused him to commit despicable acts. He thanks Alm for freeing him from the curse. Alm asks Clive what they should do with Desaix, and Clive says the answer is clear; but since Alm is the leader of the Deliverance, he should officially pass judgement. Alm sentences the traitor Desaix to death, and Desaix is executed.