Dark Spikes (Japanese: ダークスパイク Dark Spike) is a combat art which was introduced in Fire Emblem Echoes: Shadows of Valentia. It is possessed only by the Creation, who periodically uses it during its fight in the Thabes Labyrinth. When it activates this art, the Creation summons purple spikes from the ground which randomly inflict between 10 and 30 points of damage on all opposing units within a five-space radius at once.

In Three Houses, Dark Spikes is instead a dark spell, and is given the name Dark Spikes Τ (Japanese: ダークスパイクΤ Dark Spike Τ). It is a strong spell that is very effective against cavalry units. In this appearance, the spikes are depicted as appearing within the air, then impaling the target from all sides at once. 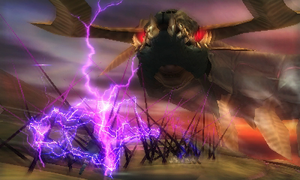 The spikes variant of Expiration in Awakening.