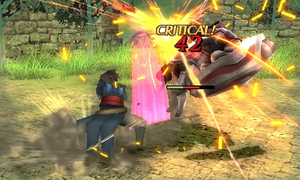 Lon'qu inflicts a critical hit upon an enemy Knight. Myrmidons like Lon'qu frequently deal critical hits due to their high skill.

A critical hit (Japanese: 必殺の一撃 critical hit), often abbreviated as critical or crit, is an uncommon and powerful type of attack inflicted at random, which deals more damage to a foe than usual. The ability to and chance of inflicting a critical hit is dictated by both a unit's stats and those of the weapons they wield, and in turn a unit's luck stat helps lower their risk of falling victim to critical hits themselves.

The concept of critical hits is widespread in role-playing games in general, both computer and tabletop, and is generally intended to simulate the random chance of a warrior's attack hitting a vital weak point on their enemy such as an organ. The Fire Emblem series use of critical hits is very much in line with this practice. Each unit has a critical hit rate which is calculated based on both their own skill stat and the crit value on the weapon they presently wield, in addition to other game-dependent factors such as skills or support bonuses. In battles, this is subtracted from the opposing unit's dodge calculation, based on their luck, in order to generate a percentage chance of successfully activating and dealing a critical hit.

Most games in the series feature a collection of classes and items which are intrinsically possessed of far higher critical hit chances than usual. Some classes, most prominently the Myrmidon class family, possess an in-built class bonus which awards a set increase to their critical hit rate at all times. While the crit stat on weapons is typically relatively low, some weapons feature a distinctly high crit stat and are specifically touted as giving their wielder a significant critical rate increase; the most prominent of these is the recurring "killer weapons" line, including the Killing Edge, Killer Lance, Killer Axe and Killer Bow, all of which typically offer a high crit stat ranging between 20 and 30. Conversely, the player is occasionally offered ways to protect units from critical hits without relying on luck stats. Certain items and skills, such as the Hoplon Guard and Fortune, completely block opposing units from ever executing critical hits.

From Genealogy of the Holy War onward, critical hits are infamously typically associated with distinct animations, actions and flourishes performed by each class to clearly demonstrate that the hit they are about to inflict is a critical hit; this effect previously existed solely for Marth and Alm in Shadow Dragon & the Blade of Light and Gaiden. For units wielding physical weapons these typically involve spinning one's weapon (or, for bow users, their arrows) around at high speed, while magical units typically wave their hands more than usual or summon additional magical runes surrounding them as they cast the spell. Additionally, in Radiant Dawn and, from New Mystery of the Emblem onwards, impending critical hits will be announced with a bright flash and distinct noise. In the NES duology and Game Boy Advance trilogy, critical hits only have one animation, while in the Jugdral and Tellius duologies they have two: one for non-lethal critical hits, and one for lethal critical hits.

These calculations are for the raw pre-battle critical rate of units, as typically expressed on a unit's status profile. In battle, the foe's dodge calculation is subtracted from the raw critical rate to produce their actual practical critical rate percentage. If an attack misses it cannot be a critical hit; this is because the game will not determine whether or not an attack is a critical hit unless it has already determined that the attack will hit. 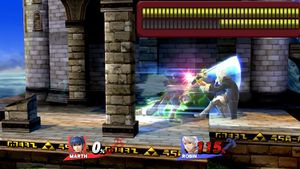 The Super Smash Bros. series uses the critical hit concept to form the move Critical Hit, Marth's Final Smash from Super Smash Bros. Brawl onward, as well as Roy's and Lucina's in Super Smash Bros. for Nintendo 3DS and Wii U, activated through use of a Smash Ball. Marth and Lucina share the same basic version of the move, while Roy's is radically different:

As with all Final Smashes, Critical Hit is depicted on trophies in Brawl and for Wii U, awarded for completing All-Star Mode with the respective character.