This sub-page covers the class change stats for the three Super Famicom games: Fire Emblem: Mystery of the Emblem, Fire Emblem: Genealogy of the Holy War, and Fire Emblem: Thracia 776.

The class change system of Mystery of the Emblem is mostly unchanged from Shadow Dragon & the Blade of Light, using a variety of class-specific items for each class to promote. Four classes which existed in Shadow Dragon & the Blade of Light without promotion options (Armored Knight, General, Hunter, Horseman) were connected into promotion lines; however, Marth, the Fighter, and the Thief are still incapable of promotion. 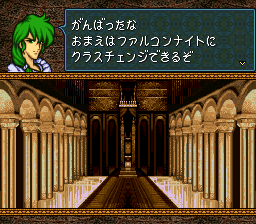 "Good work. You're ready to class change to Falcon Knight."

In Genealogy of the Holy War, physical items are not used to class change, effectively removing the main limitation of a small number of available class change items. Class changing can be initiated at any time in the chapter's home castle by selecting a unit and picking the "Class Change" option. After Oifey (first generation) or Lewyn (second generation) confirms the player's intent, the unit in question changes class.

Unlike most games, a unit becomes capable of changing class at level 20, not 10; a unit who has reached this threshold will be marked on status screens with a green up-pointing arrow. After promotion, their level does not roll back over to 1, but rather remains the same; the game's level cap is 30. In addition to stat bonuses and increased weapon ranks, some classes grant skills upon promotion. Some basic classes which have multiple class change options; however, this is not a matter of choosing a promoted class, as the resulting promoted class will depend on the individual character or their gender; for example, Larcei (Myrmidon) will become a Swordmaster, but Creidne (Myrmidon) will become a Forrest.

The Thracia 776 class change system reverted to being akin to that of Mystery of the Emblem: class changing is again achieved through the use of items while on the battlefield, instead of having to visit a specific location. Unlike Mystery of the Emblem, this time class changing is achieved entirely through a single item for almost all classes: the Knight Proof. As with in Genealogy of the Holy War, some classes may have multiple promotion options, but they depend on the specific character promoting and cannot be chosen between by the player. Due to this, promotions are linked to individual characters rather than class, once again like in Genealogy of the Holy War.