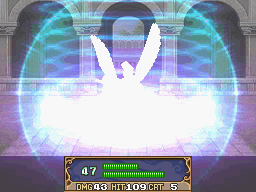 Class change (Japanese: クラスチェンジ class change), more commonly called "promotion", is the process by which a unit is transformed from a basic class into a more powerful class. With very few exceptions, the act of class changing substantially increases the stats of the unit, may increase the number of accessible weapon types available to them, and resets their level to 1 to grant them another twenty levels in which to gain stats.

In the majority of games, class changing is achieved by using special items on units once they reach a certain level threshold, usually 10. While the level threshold requirement remains consistent across the series, some other games implement different methods of changing class, some of which occasionally coexist: visiting set locations in the game, reaching their maximum level, or through story events. The main character is typically able to change class only through story events, which often happen late in the game or sometimes even only a chapter or two away from its end; this is sometimes tied with obtaining a special plot-related weapon or item, or being granted a special title or status.

While normally class change consists only of a single basic class and a single advanced class, there are a handful of games which implement some variation in this status quo. The Sacred Stones, Awakening and to a lesser extent Gaiden implement "branched promotion", where one class will have multiple class change options (often two) which can be chosen between by the player; these games also feature "trainee" classes, weaker classes which have several basic classes as their class change options, allowing them some greater variation and flexibility in their eventual advanced class choice. Gaiden and Radiant Dawn feature a more powerful third tier of classes, which the usual advanced classes promote to in turn. Three Houses goes even further and features four tiers of classes: beginner, intermediate, advanced, and master.

In Shadow Dragon & the Blade of Light, class change is achieved through the use of items specific to each class. Compared to later installments, only eleven classes—six base and five advanced—are connected into class change trees, with the vast majority—including the Lord—incapable of promotion at all.

In Gaiden, class changing is achieved by visiting any Mila Shrine. By interacting with the female statue in the center of each, the player is prompted as to whether they want to promote each unit capable of promoting at the time. Each class has a set threshold level for class changing; once they reach this, the player is notified when the unit levels up to the correct level. Gaiden is the first game to feature trainee classes (albeit only one, the Villager) and third-tier advanced classes.

Alm and Celica both promote in events: Celica promotes to Princess by talking to a woman in Grieth's Fort after clearing it in Chapter 3, and Alm promotes to Hero when Celica talks to Halcyon in the Sage's Hamlet in Chapter 4. While Celica's initial class, Priestess, is not exclusive to her, no other Priestess can promote to Princess. When promoting a Villager, the player is randomly offered a class to promote it to; if the option is not to the player's wishes, they may cancel and try again to get a different offered class. When a Dread Fighter promotes to Villager, they can promote again to any of the five options available to the Villager as usual, looping the process of the class change tree from the beginning.

The class change system of Mystery of the Emblem is mostly unchanged from Shadow Dragon & the Blade of Light, using a variety of class-specific items for each class to promote. Four classes which existed in Shadow Dragon & the Blade of Light without promotion options (Knight, General, Hunter, Horseman) were connected into promotion lines; however, Marth, the Fighter and Thief are still incapable of promotion.

In Genealogy of the Holy War, physical items are not used to class change, effectively removing the main limitation of a small number of available class change items. Class changing can be initiated at any time in the chapter's home castle, by selecting a unit and picking the "Class Change" option. After Oifey (first generation) or Lewyn (second generation) confirms the player's intent, the unit in question changes class. Unlike most games, a unit becomes capable of changing class at level 20, not 10; a unit who has reached this threshold will be marked on status screens with a green up-pointing arrow and the word "OK". After promotion, their class does not roll back over to 1, but rather remains the same; the game's level cap is 30.

The Thracia 776 class change system reverted to being akin to that of Mystery of the Emblem: class changing is again achieved through the use of items while on the battlefield, instead of having to visit a specific location. Unlike Mystery of the Emblem, this time class changing is achieved entirely through a single item for almost all classes: the Knight Proof. As with in Genealogy of the Holy War, some classes may have multiple promotion options, but they depend on the specific character promoting and cannot be chosen between by the player.

The class change system of The Binding Blade remains largely unchanged in Fire Emblem. The biggest difference is that class changing can now be done from the preparations screen, as Fire Emblem introduced the ability to use items from this menu. Fire Emblem also introduced the Earth Seal, a secondary class change item option for almost every class in the vein of the Knight Proof of Thracia 776.

The class change system of The Sacred Stones remains mostly the same as in Fire Emblem, with the addition of branched class change trees, giving every class save the Lord two class options to promote to, which are actively chosen between by the player at the time of promotion. As with Fire Emblem, in addition to the individual class change items, there is also a secondary unified class change item which works on all classes except the Lord: the Master Seal.

The Sacred Stones houses the most robust incarnation of the trainee classes system. In it, there are three trainee classes—Journeyman, Recruit and Pupil—which have a branching set of three class change options. From a trainee class, a unit will promote to become a conventional base class, and then can in turn promote into advanced classes normally.

The Path of Radiance class change system returns to each base class having a single class change option, and condenses class change items into a single item for all classes: the Master Seal. However, a Master Seal is not the only way to promote—compatible units will automatically promote without one if they gain 100 more experience after reacing Level 20. Of the two playable Thieves, only Volke is capable of promotion to Assassin, doing so in an event at the end of Chapter 19 if the player selects to hire him; Sothe cannot promote at all.

As an enhanced remake of Shadow Dragon & the Blade of Light and Mystery of the Emblem Book 1, the class change structure of Shadow Dragon is an expanded version of the original two games. The two primary differences are the use of the Master Seal as the near-exclusive class change item for all classes, and the implementation of several classes introduced in later games to give class change options to classes still lacking them in Mystery of the Emblem; however, the Lord, Thief, Freelancer, Manakete and Ballistician still cannot promote and are in compensation treated as special classes with a maximum level of 30.

In New Mystery of the Emblem, the class change system, array of classes and promotion games are almost entirely identical to those of Shadow Dragon, differing only in a few variations class base stats and therefore a few variations in promotion gains. Unlike in Shadow Dragon, the Elysian Whip can be found during the normal course of the main game, removing the restriction on Falcoknight availability.

Awakening reintroduces branching class changes for almost every class, the exceptions being the Lord and Tactician classes. A single item—the Master Seal—is used to promote all classes, including Lords. Master Seals are freely available from certain merchants on the world map, effectively allowing the player to promote every playable character.

The Fates system is unchanged from Awakening.

Echoes: Shadows of Valentia largely copies the class change system of Gaiden verbatim, with characters being required to visit Mila Shrines in order to promote, after they reach a required level. Almost all quirks associated with the class change system of Gaiden remain intact, such as promotion gains being based on whether or not a stat has reached the promoted class' base stat, and the ability for Dread Fighters to "promote" back to the Villager class, thus looping through the class change tree. As in the original, Celica promotes through an event in Chapter 3; unlike in the original, however, Alm does not promote in Chapter 4 when Celica speaks to Halcyon in the Sage's Hamlet—this merely enables him to promote, but like any other character, he must visit a Mila Shrine to do so.

The DLC of Shadows of Valentia introduces the concept of "over classes", which, once purchased by the player, may be accessed by units who have reached level 20 of their standard highest-tier class by visiting the appropriate altar; e.g. Alm must visit the Altar of the King in order to promote to Conqueror, once he has reached level 20 in the Hero class. Overclasses also grant enhanced maximum stats, additional 20 levels to grow and even new attributes as the ability to use black magic for Harrier, new spells for Enchantresses, Gurus and Exemplars or new skills like Tri-affliction for Yashas, Phalanx for Spartans and Bowrange +3 for Oliphantiers.

Completing an exam also does not forcibly switch the unit to the new class, instead prompting the player if they would like to do so themselves. Upon passing a certification exam, the unit will have their base stats boosted to the class's base stats if they are lower, like in Shadows of Valentia. Changing classes will also provide the unit various class stat modifiers, as well as bonuses or penalties to certain growth rates. A unit's level is not reset upon class changing or gaining access to a class.

Some specific classes are available only through events, and do not require passing an exam to obtain them. Byleth gains access to Enlightened One after completing Chapter 10. Edelgard, Dimitri, and Claude all automatically switch to new classes at the start of Part 2: these classes are Armored Lord, High Lord, and Wyvern Master respectively. They later also gain access to stronger versions of these classes, those being Emperor, Great Lord, and Barbarossa. Additionally, the Dancer class is made available to a unit if they win the White Heron Cup in Chapter 9.

In Tokyo Mirage Sessions ♯FE, class change is unlocked after Chapter 3. Every character is given the option of two promotions. Performing a class change will also unlock new Carnages and skills.

In Warriors, class change offers a stat boost and the ability to unlock new Crests. Unlike most Fire Emblem games, the advances class and stat gains are dependent on the character. Performing a class change will also unlock the associated costume. 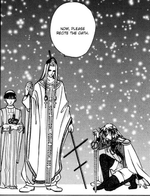 Lachesis is promoted to Master Knight

In this manga adaptation, the concept of class changing is adapted somewhat into being a process of special training. Promoted classes are considered to be an honorific title, which one has to earn by way of practical mastery of the required skills, and the process of "promoting" is a knighting ceremony.

While in exile in Silesse, Lachesis decided to attempt to pursue attaining the title of "Master", and enlisted Finn's assistance in doing so by asking him to help her train in the use of lances. She successfully attained the title, with Claud administering the ceremony, and afterward Quan reminded Finn that it was time to pursue his own knightly promotion.