The Binding Blade (Japanese: 封印の剣 Sword of Seal) is a regalia sword of Elibe which appears most prominently in Fire Emblem: The Binding Blade. It is one of two swords once wielded by Hartmut of Elibe's Eight Legends, along with Eckesachs. It is generally considered one of the legendary weapons of Elibe, but at the same time is considered to be separate from and even more powerful than the other weapons.[1] Its most prominent user is Roy of Pherae.

The Binding Blade was forged in the Scouring for the purpose of fighting dragons, along with the other legendary weapons. Widely acknowledged by both humans and Jahn as being far stronger than the other legendary weapons, it exhibits a wide range of powers: it can generate fire for use in battle, can be used to heal its wielder, can vaguely convey the memories and feelings of its past wielders,[2] and can increase the power of its bearer. Additionally, it reacts to the emotions of its wielder, changing its power and effect accordingly; in the final battle with the Demon Dragon Idunn at the Scouring's climax, it reacted to Hartmut's reluctance to kill Idunn and simply stunned her, and was later used in conjunction with the Fire Emblem to seal her away in the Shrine of Seals.[3]

In the intervening millennium, the Binding Blade was left at the Shrine of Seals, sealed away and completely inaccessible without use of the Fire Emblem: to unlock it, the Fire Emblem must be inserted into a niche in the enshrined blade's pommel.[4] Near the climax of the Disturbance of Bern, one thousand years after the Scouring's end, the Etrurian/Lycian army's General Roy used the Fire Emblem, provided to him by Bern's Princess Guinivere, to unseal the Binding Blade and adopt it for his own use in fighting King Zephiel and the Bern army. Following Zephiel's defeat, Roy used it to again fight Idunn, and with it defeated her while sparing her life, taking her to Arcadia in the hope of seeing her soul restored. 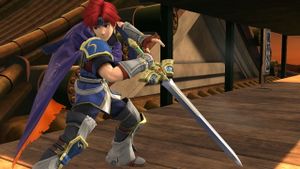 Roy wielding the Binding Blade in Super Smash Bros. for Wii U.

In Fire Emblem: Hasha no Tsurugi's retelling of the final battle with Zephiel, Zephiel himself wields the Binding Blade along with Eckesachs. Al and Roy eventually succeed in seizing it away from him and using it against him.

The Binding Blade is present as a skill on two of Roy's cards in Fire Emblem Cipher: S07-001ST Young Lion, Roy, and B05-001SR Heir of the Binding Flames, Roy. It gives Roy an effective bonus against dragons, adding +20 to his attack power when fighting dragon-type units.