Astra (Japanese: 流星 Shooting Star) is an offensive skill which debuted in Fire Emblem: Genealogy of the Holy War. When activated, the user deals five consecutive strikes. In most appearances each of the five strikes inflicts the normal amount of damage on the enemy, while others have each strike inflict half the usual damage.

Throughout its existence, Astra has been almost completely associated with sword-wielding units, particularly those of the Myrmidon class family. In Fire Emblem: Genealogy of the Holy War and Thracia 776, Astra is a personal skill, associated exclusively with members and relatives of the royal family of Isaach. In Path of Radiance and Radiant Dawn, Astra is the mastery skill of the Swordmaster and Trueblade classes. In Awakening and Fates, Astra is again learned only by Swordmasters, but can be possessed by units of any class by using a reclassing seal after learning it.

In Three Houses, Astra is a combat art that, when selected, in exchange for a heavy durability cost, inflicts five blows with 30% the normal damage, and the user cannot double. This is similar in function to the Astral Blade combat art from Echoes: Shadows of Valentia.

Both the Astra skill and several unique derivatives of it are present on five cards in Fire Emblem Cipher, all of which feature members of the Isaach royal family: 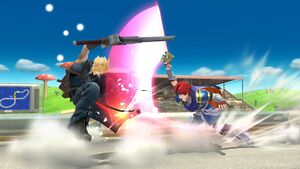 While Astra has not appeared in the Super Smash Bros series, Dancing Blade and Double Edge Dance were likely inspired by Astra’s appearance in Genealogy of the Holy War and Thracia 776.