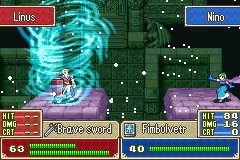 Anima magic or nature magic (Japanese: 理 reason) is a weapon category in the Fire Emblem series and one of its three primary types of offensive magic. This magical discipline is centered around communion with and mastery of the forces of nature itself, is chiefly associated with Mages and Sages, and its structure and approach to spell-casting is described by Canas as being elegant and refined with a sense of freedom to it.[1] Anima magic can be further divided into four types of magic: fire, thunder, wind, and ice.[2][3]

The anima weapon category in and of itself exists only in the three Game Boy Advance Fire Emblem games: The Binding Blade, The Blazing Blade and The Sacred Stones. Otherwise, anima magic exists primarily as its three subcategories—fire, thunder, and wind (ice being rolled into wind)—in Genealogy of the Holy War, Thracia 776, Path of Radiance and Radiant Dawn. In the Game Boy Advance games, the anima hierarchy is comprised of a selection of tomes from all of its subcategories, and statistically are differentiated from the rival schools of light and dark magic by the average stats of each anima tome: anima tomes are balanced in their might, weight and hit and thus are fairly simple and straightforward to use, in this regard being something of a magical counterpart to lances.

Both as its own weapon category and in the form of its four separate subcatagories, anima magic is affected by the trinity of magic determining weapon type superiority. In the Game Boy Advance games and Radiant Dawn, all anima spells share the same Trinity relationship with light and dark magic: anima spells have an advantage over light spells, but are disadvantaged against dark spells. Additionally, the three subcategories are governed by their own trinity structure in Genealogy, Thracia 776, Path of Radiance and Radiant Dawn: wind beats thunder, thunder beats fire, and fire beats wind. In Radiant Dawn, both Trinities of Magic come into play simultaneously for anima magic.

Note: This table lists all appearances of the weapons in question. They are only classified solely as anima magic in The Binding Blade, The Blazing Blade, and The Sacred Stones; only their special properties relevant to their appearances solely as anima are listed, and their classifications in other games are noted.

There are 8 different classes which have been able to wield anima magic as a distinct weapon type at any point in the series.