Almedha (Japanese: アムリタ Amrita) is a former concubine to King Ashnard of Daein, and the mother of his only child. Though their relationship was brief, her involvement with Ashnard was responsible for a series of tragedies which played a key role in the Mad King's War. Three years after that war's end, she was part of the war to liberate Daein from Begnion control, as the queen mother and a close confidante to Ashnard's successor, Prince Pelleas.

Almedha was born as one of the three known children of Dheginsea, the long-lived black dragon king of Goldoa. She did not agree with her father's strict policy against any Goldoan using their dragon powers for the purposes of war, so she left Goldoa alone.[1] Her journey eventually took her to Daein, where she met the young prince Ashnard. Although the two never actually felt love for each other, there was nonetheless a very strong, passionate attraction between the two, and while the two never formalized their relationship with a marriage, Almedha later reflected that she felt that Ashnard had relations with no other woman and that she was the only one he would ever call his wife.[2] She was privy to Ashnard's plan to seize control of Daein through a blood pact, and was present in the final moments of the plan when Ashnard killed his father and ended the pact's curse.[3]

The relationship between Ashnard and Almedha revolved entirely around Ashnard's hunger for power: Ashnard desired Almedha for her sheer power as a black dragon, but after getting her pregnant, she lost her powers and became completely useless to Ashnard. Following the birth of their child, Ashnard became obsessed with the boy out of hope that he possessed great power, but he soon proved to have no special abilities to speak of. Ashnard used his son to bait Almedha's brother, Rajaion, to Daein, who he turned into a Feral One and forced into service as his "wyvern" steed. Ashnard then abandoned the child entirely, denying Almedha the opportunity to raise him, and resulting in the end of their relationship. After this, the two never met each other again.[2] For over twenty years after this, Almedha searched for her son but never found him. 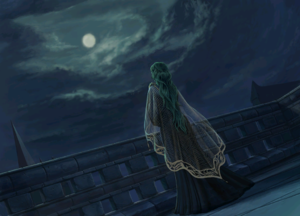 Using a sending stone, Almedha begs Kurthnaga to help her save Pelleas from the blood pact.

Three years after the Mad King's War, Almedha was drawn into Izuka's plots to install a puppet ruler as the king of Daein for the purposes of the Begnion senate. Izuka introduced her to Pelleas, her alleged son with Ashnard, and through her sheer desperation to see her son again she instantly believed in Izuka's claims and became heavily attached to him as his mother.[4] Along with Izuka, Almedha became a close confidant to Pelleas as he worked to raise a liberation army to take back Daein from the control of the Begnion garrison, and hid away with him in the ruins of the Desert of Death as they withstood a Begnion siege under the protection of Tauroneo, Jill, and Zihark. She was present when Micaiah and the Dawn Brigade arrived, defeated the Begnion forces, and met with Pelleas for the first time, and during this time she was also briefly reunited with her brother, Kurthnaga, who had been traveling with Micaiah in the guise of a simple pilgrim. Although Kurth left the party shortly after to return to Goldoa, owing to his discomfort with war, he left Almedha a sending stone to use to contact him if she ever needed his help.[5]

Almedha continued to travel with and advise her son through the war with Begnion, and continued to stay by his side after his coronation, insisting that both Izuka and the Black Knight had been abducted to harm Pelleas and that she would protect him from his enemies.[6] She was present with Pelleas when he commanded Micaiah to lead the Daein army to assist Begnion in their war with the Laguz Alliance, and after the Daein army failed to win one of its battles with them, she inadvertently witnessed Lekain threatening Pelleas over this failure; although she could tell that Pelleas was terrified, he rebuffed her attempts to help him.[7] She realized that Pelleas had been tricked into signing a blood pact with the Begnion senate, which Lekain used to force him into the war. The following night, she used her sending stone to contact Kurthnaga, begging him to help save his son.[8]

After the battle of Castle Nox, Micaiah realized that Almedha had knowledge of blood pacts, and attempted to convince her to reveal what she knew about them. Although she refused, Pelleas convinced her to share her knowledge by telling her the only way out was to kill himself. She told them the story of how Ashnard had seized control of Daein with a blood pact, and then destroyed both the pact and his father to ensure he was not cursed himself.[3] Both Pelleas and Almedha still believed that the only way out was to kill Pelleas, to her distress, but the arrival of Kurthnaga and his reminder that Lekain could be killed instead to end it changed their outlook. Kurthnaga promised to protect Almedha and Pelleas and give them time to find Lekain to end the pact.[9]

Soon after this meeting, Micaiah led the Daein army in a final battle against the Apostle's Army to buy themselves time to save Daein. This battle resulted in the awakening of the goddesses Ashera and Yune, and in Ashera judging the world and petrifying most of the inhabitants of Tellius. Almedha survived the petrification and, after Yune recruited Ike and Micaiah's forces to help her stop Ashera, she and Pelleas accompanied Elincia and Tibarn's party, the Hawk Army, on their journey to the Tower of Guidance. However, her presence in the party caused them serious problems as she kept slowing them down.[10] Furthermore, her relationship with Pelleas became strained as he started to feel uncomfortable with her coddling him.[11] She began to feel disliked and unwanted by everyone in the army as a result, leading to a conversation between her and Elincia about her history with Ashnard.[12] She continued to keep to herself for the rest of the journey, but Reyson used a galdr to help her calm down.[13]

When the three armies reached the Tower of Guidance, they learned that Dheginsea and all of Goldoa, save for Kurthnaga, Ena, and Almedha, had sided with Ashera. Soon after this, the three were approached by Nasir, who accused Almedha of being the cause of everything that had happened, and saying that her decision to leave Goldoa had brought Tellius to the brink of destruction once before by risking dragging Goldoa into the Mad King's War, a risk only narrowly averted by Ike's victory over Ashnard.[1] As she was unable to fight, Almedha did not accompany Ike, Micaiah, and Kurthnaga into the Tower of Guidance.

During his travels to and battles inside the Tower of Guidance, Pelleas had begun to doubt that he was Almedha's real son, and his suspicions were confirmed by Izuka when they fought him. After their victory over Ashera and the reversal of her judgement, Pelleas revealed this to Almedha and, despite her insistence, apologized to her for deceiving her, and thanked her for showing him what it was like to have a mother.[14] Pelleas gave Almedha a hint to the identity of the man he believed to be her true son: Soren, Ike's tactician. Almedha had a brief meeting with Soren as the various allies of Ike and Micaiah parted ways, and while she did not reveal herself to be his mother, she was proud to see what he had become.[15]

Although she is a major character, Almedha never appears in gameplay.

Although Kurthnaga describes Almedha as having been brave and resilient in her youth,[16] her experiences of loss and powerlessness over the decades had dramatically changed her into an unstable and even paranoid woman by the time Micaiah and Pelleas met her, a fact actively mocked and exploited by Izuka.[4] Having been separated from her son for decades since her parting with Ashnard, Almedha was obsessively doting and protective of Pelleas, and was willing to do anything to protect him. Even when she learned of the blood pact, Almedha was reluctant to help Pelleas and Micaiah with what she knew about their workings, since she believed it could result in Pelleas dying in an attempt to break the pact.[3]

Almedha was disrespectful and distrusting toward everybody outside of her own family out of her desire to protect Pelleas, even if Pelleas himself vouched for them, and believed that enemy forces constantly conspired to put an end to Pelleas and his reign. She insisted that she was the only person Pelleas could rely upon for anything.[6] This may reflect how Almedha believes that nobody truly likes or cares about her,[12] a result of her experiences ever since leaving Goldoa and how they slowly took away everything and everyone that ever mattered to her.[17] She was desperate to hang onto Pelleas above all else, having nothing else left in the world for her, and tried to deny his revelation that he was not her son.

Almedha is featured on one card in Fire Emblem Cipher.