This article is about a recurring skill in the Fire Emblem series. "Aether" is also the name of the special type of stamina used in Fire Emblem Heroes's Aether Raids mode.

Aether (pronounced /⁠ˈiθɚ⁠/[key][1]; Japanese: 天空 Heavens) is an offensive skill which debuted in Fire Emblem: Path of Radiance. When activated, Aether deals two consecutive blows to the enemy. The first blow has the effect of the Sol skill, draining hit points from the target to heal the user, and the second has that of Luna, bypassing the target's defensive stats. As with the two base skills themselves, the specific effects of Aether vary somewhat beyond this from game to game.

Aether is primarily available only to the protagonists of certain games, and is most commonly associated with Ike and, to a lesser extent, Chrom and Lucina. It is traditionally obtained after class changing, as a mastery skill in Path of Radiance and Radiant Dawn, tied to Ike and Greil's classes, Lord, Hero and Vanguard, and as a class skill learned by Great Lords in Awakening. In Fates, in addition to Ike and Lucina possessing the skill as amiibo units, it is possible to teach Aether to any other unit in the game as a downloadable content reward. 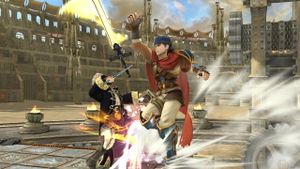 Ike using Aether in Super Smash Bros. for Wii U.

In Super Smash Bros. Brawl, Super Smash Bros. for Nintendo 3DS and Wii U, and Super Smash Bros. Ultimate, Aether is Ike's up special move. Its appearance is modified from its Fire Emblem appearances in that it entails only a single strike, omitting the second upward slash, and none of the added effects from Fire Emblem apply. Additionally, Ike's Final Smash is Great Aether, characterized as a significantly more powerful variation of Aether and possibly inspired by Ike's final strike against Ashera in Radiant Dawn.

Super Smash Bros. for Nintendo 3DS and Wii U introduced character customization, including alternate variations on each character's special moves. Like all special moves in the two games, Aether has two variations, which are found at random and collected during the course of the game's other modes.

Chrom uses Aether as his Final Smash in Super Smash Bros. Ultimate, based on its Awakening animation. It is known as Awakening Aether. When initiated, he yells "Anything can change!", "Now I'm mad!", or "Your end has come!", which are some of his critical/skill trigger quotes from Awakening (although he said "Now I'm angry!" in Awakening instead), and then yells "Ae...ther!" when performing the attack.

In his guest appearance in Code Name: S.T.E.A.M., Aether is Ike's special ability. It inflicts high damage on enemies stationed in front of Ike when it is activated. However, it can only be used once per attempt at a chapter.

Aether is present as a skill on one card in Fire Emblem Cipher: B05-089SR Radiant Hero, Ike. It is a trigger skill which activates automatically when Ike is used to attack the opponent's lord unit, which adds +10 attack power to Ike until the end of the opponent's next turn. If the player chooses to do so, Aether also allows him to automatically destroy any two other enemy units in addition to their attack on the opponent's lord, in exchange for a steep price in bonds. Ike's other skill on this card, Memories of War, allows the player to reduce the bond cost of Aether depending on how many cards have been stacked underneath Ike's card.

Aether is one of Chrom's skills in the game. When he is fought as a boss enemy, it is only used as an unavoidable attack when he is in his overdrive state.

An alternative version of Aether that shares its name with his Final Smash in the Super Smash Bros. series, Awakening Aether, can be used by him under certain conditions when he is under the control of the player as a playable character.